These days I am not much of a socialiser. Gone are the days when I would be out "clubbing" in the deep of winter dressed in ripped jeans and a French Connection tee shirt, instead I am now found having a snooze on the sofa in front of episodes of Law and Order SVU or reruns of my favourite series White Collar.

The other day however, after a long day at work, I decided to meet a friend for some drinks after my late night finish. Other than work, I can't remember the last time I was out past 11pm! And so with this in mind, this was the first time I have ever used the NIGHT TUBE…

Before I continue on, I think it's important that I level with you. I have an issue with sickness. Actually, it's more than that, it's a phobia – a very real one that affects my life every single day. Just the mention of the work "Sick" can be enough to trigger physical reactions. My mouth becomes dry, I get tension in my neck, my stomach churns slowly and deliberately and then my mind kicks in and I start to see pale faced people, liquid droplets in the air and it all gets too much. Sometimes I run, I get out of there to fresh air or a bottle of water, other times I am stronger and can try my best to take control back. It can be debilitating but I can't let it win. So these days I  don't really go where drunk people will be. I have a quiet drink in a local pub and that's about it.

So enjoying the conversation and prosecco at my post work drinks, I didn't think much about my journey home. I knew I would get the night tube, but presumed it would be quiet… HOW WRONG I WAS!

When I approached the platform at Leicester Square, people were 3 deep on the platform and staggering around clutching half finished cans of Stella Artois or applying lipstick as though their makeup artist had travelled from Clown Town! Three people were seemingly passed out on the floor or asleep on the benches  and some very sleazy and questionable chat-up lines were being used by a group of chubby Essex boys with over waxed eyebrows and quiffs that made them seem half a foot taller! 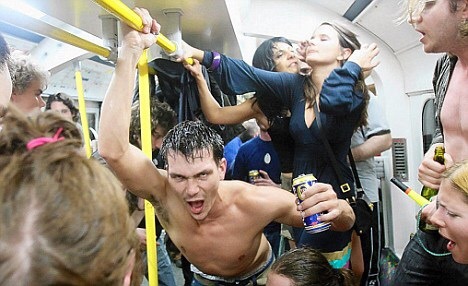 The bustle gets onto the next tube, and as I squeeze on I find one lone seat. There is a girl next to it, leant against the greasy glass, who had been one of the bench sleepers a moment before. I Sit. It's a bit loud but nothing too much to worry about, my anxiety is lowish at the moment. At Covent Garden the girl sits up all of a sudden, smiles broadly and then I see the colour drain from her face – one of her companions asks

She can't reply she just points to her mouth. My anxiety spikes and its uncontrollable… I bolt to the other end of the carriage and antibac my hands for good measure.

Next I find myself in close proximity to the group of "Lads" who are now taking it in turns to "chat up" an Aussie Lady whose responses are comedy gold, but all in good humour. We smile at each other whilst I stifle a  lol at one of the boys inviting her to "Mum and Dad's" but it was ok because his room was at at the opposite end of the corridor!

Next a young guy, who had been listening to gangsta rap on his headphones, realises this is his stop and bolts for the bleeping doorway. In doing so he forgets to "mind the gap" and plummets face first into a light green suitcase, which in turn topples its owner over like a domino rally!

A young girl who clambered over the suitcase and roadkill humans, makes her way into the door before it attempts to close again and begins to manically laugh… before we reach the next stop she vomits into the Selfridges bag that she is clutching and then cries because she realises she was sick on her purchase (who knows what she had bought!)

There was a tap-dancing preacher, 3 people wearing no shoes and a man plucking his eyebrows (travel will never get in the way of his skincare regime #goals). But beyond all the hubbub I hadn't given more than a cursory glance to the vomit… I realised with all the craziness that I had managed to stay put, in a carriage, knowing all the time that "Vom in a bag" was literally a few feet away!

I'm not gonna lie, the night tube sucks! It's a lovely idea in theory but in practice it's just plain grubby. But I did it, I braved it – and whilst for most this is no challenge at all, for me I battle my phobia everyday, and by George am I proud of myself!